All about MotoGP Racing 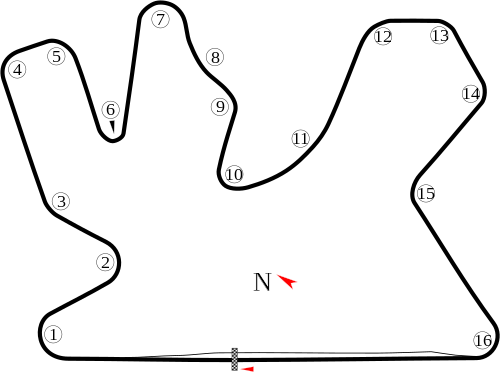 
Well, the off-season for the bikes is over.............the 2010 MotoGP World Championship has arrived, and what better way to start off the new season than under the lights at the Losail International Circuit in Qatar.


~~~Ducati Marlboro rider Casey Stoner started the Commercialbank Grand Prix of Qatar weekend as the leading MotoGP rider, setting the fastest time of the first free practice session. The first day of action at the opening round of the 2010 season concluded on Friday evening with Casey Stoner the quickest MotoGP rider under the floodlights of the Losail International Circuit. The Australian is seeking his fourth successive win at the track this weekend, as he bids to get his title challenge off to a winning start by carrying over his form from the final pre-season Test.

Stoner’s time of 1’55.500 on board his new Desmosedici GP10, resplendent with its new big bang engine, placed him just over half a second ahead of the rest of the 17-strong field, as he displayed his strength at the desert track and ensured he was the only man to get under 1’56” barrier. Stoner set his time on the ninth of 17 laps, the fewest completed of all the riders.

Jorge Lorenzo (Fiat Yamaha), who admitted prior to the weekend that he may not be at full fitness as he continues to recover from a hand injury, showed no signs of hesitance as he set the second best time of the hour-long session. The Spaniard’s best lap of 1’56.026 came right at the end of the practice, and just before he had a fall which did not appear to cause him any problems.

His teammate, reigning World Champion Valentino Rossi, was third on the timesheet on board his factory M1 prototype. The Italian, who will aim to get his title defence off to a winning start, timed in at just two-thousandths of a second off his colleague Lorenzo.

Andrea Dovizioso of the Repsol Honda team took his factory RC212V round in the fourth best time. The Italian, who finished last year’s race in fourth place, was just over a second off Stoner’s pace with a time of 1’56.698, and it was Stoner’s team-mate Nicky Hayden who made the fifth spot at just under a tenth of a second behind.

The highest-placed rookie was Ben Spies (Monster Yamaha Tech3) as he showed further signs of taking to the premier class well in sixth spot, with fellow newcomer Álvaro Bautista (Rizla Suzuki) on the GSV-R the final rider under 1’57”.

Randy de Puniet (LCR Honda), Mika Kallio (Pramac Racing) and Héctor Barberá (Páginas Amarillas Aspar) were all inside the top ten, with Dani Pedrosa (Repsol Honda) 11th. The 2009 third-placed Championship rider continues to struggle on his factory bike, and was over a second-and-a-half off Stoner’s pace as he lapped at 1’57.133.

Colin Edwards (Monster Yamaha Tech3) followed, and Loris Capirossi (Rizla Suzuki) was 13th. The veteran Italian had a crash with 20 minutes of the session to go, but returned to the track to set his best time, ahead of Marco Simoncelli (San Carlo Honda Gresini Team), Aleix Espargaró (Pramac Racing), Marco Melandri (San Carlo Honda Gresini Team) and Hiroshi Aoyama (Interwetten Honda MotoGP).
The Sci-Fi Station Come by and visit when you get the chance.

------Casey Stoner was the quickest rider of the MotoGP field as he led the timesheet once more in the second practice session of the Commercialbank Grand Prix of Qatar on Saturday. The Australian’s time of 1’55.501 was only one-thousandth of a second slower than his best lap in the previous practice, as he displayed a consistency that will have placed him in a quietly confident position heading into qualifying.

The Ducati Marlboro rider led for the majority of the hour-long session, and was over three-tenths of a second faster than World Champion Valentino Rossi (Fiat Yamaha). The Italian posted a time of 1’55.841 as he improved on his time from Friday, and was the only other rider to join Stoner under the 1’56” mark.

Randy de Puniet was the highest placing Honda rider on board his RC212V of the LCR Honda team, as the Frenchman shaved almost 0.7s off his best time from the previous evening with a 1’56.350, whilst Andrea Dovizioso (Repsol Honda) was again fourth as he kept track of De Puniet at just two-tenths behind.

Jorge Lorenzo (Fiat Yamaha) was inside the top five at just over a full second off Stoner’s pace, with Mika Kallio (Pramac Racing) another rider to make a notable improvement as he took his Ducati round in the sixth best time of the session.

Rookie Héctor Barberá (Páginas Amarillas Aspar) had a slow-speed fall with just under ten minutes of the session remaining, and returned swiftly to the track to complete his practice ahead of this evening’s qualifying session, which is due to start at 10.55pm local time.
The Sci-Fi Station Come by and visit when you get the chance.

Stoner on the point at Losail

-----Casey Stoner’s strength at the Losail International Circuit was evident once again in qualifying practice on Saturday evening, as the Ducati Marlboro rider posted a best lap of 1’55.007 to place himself in pole position for the start of Sunday’s season-opening race.

Having won the floodlit race from pole position last season the Australian beat his qualifying time from 2009 by over two-tenths of a second, as he followed up his display as the fastest rider in free practice this weekend.

Stoner said: “You never know what’s going to happen on Sunday, so we’re not playing our chances down, we’re just being realistic. We’ve been let down in the past a few times when things have looked good – it’s one thing to start the season strong but you have to finish it strong. We’re going to try and stay a bit more focused this year, and pole position is definitely the best way to start off the season.”

The Australian admitted there were still a few minor tweaks to make, and that he was not totally content with his set-up. “It’s still not 100%, we found something in this last session,” he explained. “In FP2 we really struggled because we had a problem with the front brakes and we lost a lot of set-up time, but in general the bike is working well enough and we can sort out a few things tomorrow in warm-up.”

Reigning World Champion Valentino Rossi (Fiat Yamaha) was second fastest in the hour-long qualifying with a time of 1’55.362, as he ensured his title defence will begin from the front row of the grid in Losail.

Rossi’s Fiat Yamaha team-mate Jorge Lorenzo looks to be in good shape despite some concerns over his fitness that were still lingering at the start of the weekend. Any such questions were answered with a strong display that had been hinted at in practice, as the Spaniard timed in at just over half a second off Stoner’s pace to complete the front row.

Heading up the second row for the inaugural race of 2010 will be Randy de Puniet. The LCR Honda rider’s progression throughout the weekend continued with a best time of 1’55.831, putting him in fourth position and making him not only the fastest Honda on the starting grid but also the highest placed private rider.

Loris Capirossi (Rizla Suzuki) will start his record-breaking 300th Grand Prix from fifth place after his late surge also produced a leap in places. The veteran, with a time of 1’55.899 on his GSV-R, was ahead of fellow Italian Andrea Dovizioso (Repsol Honda). His team-mate Dani Pedrosa – who had struggled to find his pace during free practice – managed to step his level up as he posted a time of 1’55.990 to take seventh spot.

Ben Spies (Monster Yamaha Tech3) finished 11th, and there were crashes for Mika Kallio (Pramac Racing) – 12th – and Marco Simoncelli (San Carlo Honda Gresini Team) – 15th – inside the opening 10 minutes of the session. Álvaro Bautista (Rizla Suzuki) had a fall late on, but only after he had set his best time which will see him start his first MotoGP race from 13th position.
The Sci-Fi Station Come by and visit when you get the chance.


~~~~The World Champion started his title defence in 2010 with victory as Stoner crashed out, in a gripping race that saw Lorenzo join him on the podium. Dovizioso edged out Hayden for a dramatic third place.

The five-month wait for the start of the 2010 MotoGP World Championship came to an end on Sunday evening at the Commercialbank Grand Prix of Qatar, and an eventful opening race at Losail did not let fans down as Valentino Rossi took victory, from Jorge Lorenzo and Andrea Dovizioso.

An exciting start saw Dani Pedrosa (Repsol Honda) shoot up from seventh on the grid to lead the field into Turn One, and as the opening laps unfolded the Spaniard, Rossi, poleman Casey Stoner (Ducati Marlboro) and his teammate Nicky Hayden commenced a battle at the front.

A difficult weekend ended in grave disappointment for Mika Kallio (Pramac Racing) as he crashed out early on, and as the action on the track continued to develop there was to be another Ducati to suffer a premature end to its race. This time it was the factory Desmosedici GP10 of Stoner, who lost the front of his bike going into Turn Four on the fifth lap when in the lead, dramatically ending his participation after he had been the huge favourite to take victory at the circuit for the fourth successive year.

That elevated Rossi to first place, with Dovizioso and Hayden behind him in hot pursuit. Rossi’s Fiat Yamaha teammate Lorenzo also started to climb, moving up to fourth at the midway point of the race. Pramac Racing’s remaining rider Aleix Espargaró was forced to retire after becoming the third rider to fall.

With the excitement building, Dovizioso started to challenge Rossi and at one point took the lead from the World Champion, only to see it reclaimed. Hayden then swapped places with Dovizioso as the pair intensified their fight for second and third position respectively.

Lorenzo made his move and went through on Hayden before passing Dovizioso as well to move into second position as the riders entered the final lap, which delivered a grandstand finish in the battle for the final podium position.

As Rossi crossed the line with just over a full second of an advantage on the rest of the field, Lorenzo took second as he showed little sign of the hand injury that had placed a question mark over his fitness. Dovizoso claimed third in a sprint for the line as he held off Hayden by 0.011s.

Rookie Álvaro Bautista (Rizla Suzuki) suffered heartbreak on his premier class debut, crashing out late in the race when in 13th place having held his own for much of the contest.