All about MotoGP Racing

With the summer break approaching the stars of MotoGP make their way to the first of the two U.S. events on the calendar, the Red Bull United States Grand Prix................. 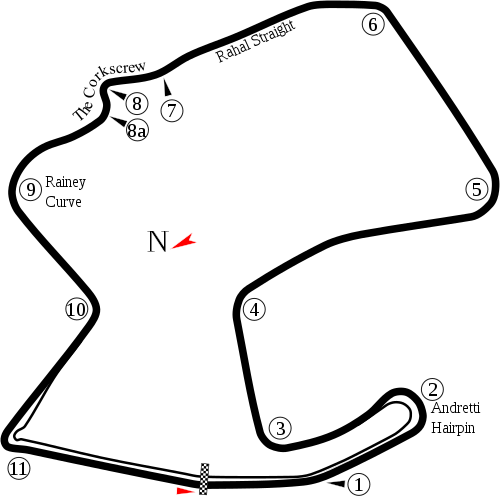 Track Map, Mazda Raceway Laguna Seca
The Sci-Fi Station Come by and visit when you get the chance.

-----Casey Stoner found an immediately fast pace at Laguna Seca as he took top spot on the timesheet from Jorge Lorenzo just before the midway point of the first practice, and he did not relinquish it as he lapped consistently fast for the rest of the session having switched bikes early on following some dissatisfaction with his front-end feeling.

Inside the final five minutes the Australian posted his best effort of 1’21.699, just 0.021s off Lorenzo’s pole time from last year, and that left the Ducati Team rider 0.233s clear at the top of the timesheet. Fiat Yamaha rider and Championship leader Lorenzo was the only other rider under the 1’22” mark, as he also made a fast start to his weekend with a best of 1’21.932.

Andrea Dovizioso was the highest placing Honda rider in the session as he took his factory RC212V around in a best time of 1’22.225, just over half a second off Stoner’s pace. The Italian’s Repsol Honda colleague Dani Pedrosa, who won last year’s race at the track, was fourth quickest at a further three-tenths down on his team-mate’s time.

Monster Yamaha Tech 3 rider Ben Spies was the highest placing American rider in the session, the rookie – albeit riding on one of the few tracks he has experienced before – setting a best time of 1’22.640 towards the end to secure fifth. Valentino Rossi (Fiat Yamaha) was sixth and also the last rider within a second of Stoner, as the recovering Italian put in a best time 0.961s off that of Stoner’s.

Marco Simoncelli (San Carlo Honda Gresini Team) had a crash at turn three very early in the session but was uninjured and returned to the track to go 12th fastest, and Randy de Puniet’s substitute on the LCR Honda team Roger Lee Hayden was just under four seconds off Stoner in 17th as he took his first ride on the satellite RC212V.
The Sci-Fi Station Come by and visit when you get the chance.

-----The world domination tour of Jorge Lorenzo continued in the Red Bull U.S. Grand Prix at Laguna Seca as the breakaway world title leader orchestrated yet another commanding victory from pole. And his primary rivals on the weekend, Dani Pedrosa and Casey Stoner, only helped pave the way for the eventual coronation of the Spaniard, laying out the red carpet to ease the Lorenzo's charge to victory in America.

Despite starting from pole, Lorenzo found himself shuffled down to fourth in the opening corner. Quickly displacing of local hero Ben Spies, the Fiat Yamaha Team superstar set his sights on the disappearing Dani Pedrosa and feisty Casey Stoner.

Just as Pedrosa slowly started escaping towards a second straight victory (both this season and at Laguna Seca), Ducati Marlbor runner Stoner ran wide, allowing Lorenzo to swing through without a challenge. Lorenzo then eyed bitter rival Pedrosa, who had assembled over a second's worth of padding as the front three left the remainder of the field in their wake. A tenth here and a tenth there saw the Yamaha pilot cut that gap in half.

The result? Pedrosa folded. The Honda prodigy crashed out of first place while working lap 12 in Turn 5, handing the lead -- and ultimately the race -- to Lorenzo. Jorge then sailed off into the distance, piling up over four seconds on eventual runner-up Stoner before wheelie-ing his way to a 3.517-second margin of victory. After storming to the checkered flag, Lorenzo donned a silver 'spacesuit' and performed a slow motion moon walk and flag plant to add to his fast-growing celebration resume.

Third place went to legend Valentino Rossi, who had his hands full with Nicky Hayden and Ben Spies -- the local favorites taking turns harrying the Italian for fourth deep into the race. But Rossi took full advantage of a mistake by a hard-charging Spies and turned his attention to Andrea Dovizioso, who he promptly hunted down from seconds back to steal away the final podium position late in the contest. Ducati Marlboro ace Hayden made Spies pay for running wide as well, coming home in fifth, one spot of his countryman.

Spies' Monster Yamaha Tech3 teammate, Colin Edwards made it three Americans in the top seven, crossing the stripe in seventh, albeit over twenty seconds in arrears of his rookie apprentice. Fourth American Roger Hayden overtook Alex de Angelis at the end of the race to finish in eleventh position on the LCR Honda.
The Sci-Fi Station Come by and visit when you get the chance.